Using well known paintings in art history in a public gallery setting, The Missing Women Series is a tongue-in-cheek, but earnest look at how women are presented but not represented in art, society and history. The image of the woman’s body is omitted from renderings of famous paintings, leaving on show the board it was painted on, to highlight the lack of documented female genius recorded in history, lack of societal appreciation and wage equality, lack of proportional representation in politics and other disparities. Women from a young age are encouraged to succeed and at the same time, take on supportive roles, they juggle multiple responsibilities, all while being pressured to look picture-perfect. Most do not get the compensation and recognition they deserve outside the realm of domesticity and this leaves their work vulnerable to appropriation or being overlooked.

Western verbal and visual communication systems represent a predominantly white, heterosexual cis-male, perspective. This creates huge problems in communication for anyone else. For women the most obvious difficulty is portraying their body image without it seemingly on display for male appreciation. Women do not own the images of their bodies, which are seen everywhere, but their accomplishments are mostly invisible.

Materials are pertinent to my work. Frames are a format which keep the missing women contained and presentable. The missing women are often adorned with shiny packaging items reflecting how women are dressed up and gifted, or gifted things, instead of being paid fairly. They are commodified and wrapped ready for consumption but the perceived sexuality in the natural wood requires that we acknowledge it to be only a projection.

Artists have been referencing images in fine art for decades. Magritte, Duchamp to more recently artist like Mickalene Thomas and Cindy Sherman have used images in art to either poke fun at tradition, or to use as reference to make a statement.  Museums are places where we preserve what we value, I use a museum gallery setting installation, complete with ankle barriers, viewing benches, security guards and a docent tour, to reach back into the annals of history and allow the evidence to speak for itself.  That women still hold no value in the system of education which is set up to applaud cis-white men only.  From museums to history taught in schools, there are huge gaps in how women are represented in society.  We know of many cases where evidence shows women who have not been credited with genius, in the arts, science or otherwise, but little has been done to set right these gaps education. It is a theft of female identity. Our girls simply do not see their worth reflected in what we teach them, and in the words of Gloria Steinem: “If you don’t see it, you can’t be it.”

My work speaks to this lack of acknowledgement of women in history, but it also stands in solidarity with any section of society which has been under or misrepresented.

The Missing Parents Series is dedicated to the parents who will suffer because of forced pregnancies, due to current attacks on reproductive rights.

The Missing Women/Parents Series solo show/installation with performance by John Serembe:
LGM Studios in Olympia, WA. Dates to be decided. 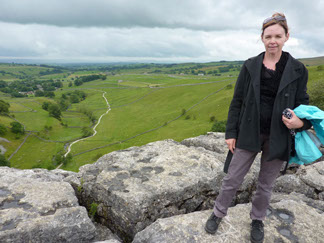 Lynette was born in The Yorkshire Dales in The North of England. She paints from her home in Olympia, Washington. She holds a BA (hons) degree from Cardiff, South Wales and an MFA from Chelsea College of Art in London. While she was a student she worked with the sculptor Andy Goldsworthy,  Lynette studied various aspects of art history and feminism, studying under the instruction of Graham Crowley at Cardiff and Amanda Faulkner at Chelsea, researching imagery and language of materials in art. While tackling issues of feminism It occurred to her how extremely difficult it is to represent the female form from the female perspective. This problem is apparent in everyday life and has never been far from her mind.  Lynette spent a long time traveling internationally while working in the animation business. Her years in animation helped to hone her drawing skills while being required to imitate many styles. It was the combination of these life experiences along with Lynette’s concerns for the world her family is learning to negotiate, that culminated in her current series “Missing Women.” 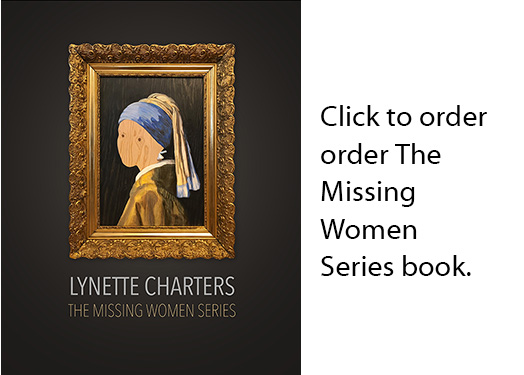